In this article we look at the historical background to making the film and DVD, “Batik of Java: A Visual Journey”.  While the project was principally sponsored and funded by the San Francisco Asian Art Museum, it was the relation I developed with Indonesian collector and historian Daniel Gundlach that enabled us to create the feature length DVD.

I met Daniel Gundlach when I was still living in San Francisco. I was looking for a collaborator for some batik projects and found him through his business, The Language of Cloth. It seemed we had a mutual friend in Rudolf Smend, the pre-eminent collector and curator of batik textiles and author of many books on batiks including “Batik: Traditional Textiles of Indonesia” [Tuttle Publishing].

Daniel had been traveling back and forth to Central Java and had even rented a house there; his stays often lasted more than 3 months at a time.  Being in Java gave him the opportunity to explore textiles of neighboring countries such as Laos and Cambodia and he quickly became familiar with the leading communities making the best textiles.

Daniel developed an interest for photography and collecting video.  Over the period of 15 years he assembled more than 30,000 images and dozens of HD video segments detailing everything from indigo cultivation to batik tulis or writing with a wax pen to create design pattern on cloth.

Based upon his extensive collection of images and his deep understanding of Central Java, I felt comfortable asking him to take a principal role in choosing who we were going to film.

Batik is first and foremost a peasant craft.

While it has been elevated to ‘high art’ and many antique pieces now fetch tens of thousands of dollars at market, the vast majority of batik work is done by people who are making ceremonial and daily wearable clothing.  Loose cotton is comfortable in the high humidity and hot summer days of Java, and the sarong or waist wrap is worn by both men and women alike to remain cool, dry and comfortable.

So to really understand batik you can’t visit a museum or a popular tourist batik shop in town.  You have to drive outside of town to small villages where self-employed makers and community collectives practice batik making ‘the traditional way’ — sitting on a pillow or small stool near the floor, and using a melting pot called a ‘wajan’ dip and apply the wax to the cloth.  It can take 10 or 20 years to learn the art of ‘menyanting’ or waxing, and even longer to be recognized as a master.

For most the process is a past-time — much like embroidery or quilt making.  It is a social event for many makers who have jobs in the early part of the day before heading over to a community batik making house to join in with conversation, story telling, news and batik production.

It is never about the money.  It is really about the meditative practice.

Daniel had a clear idea of who and what we should film, which begins with an examination of the primary colors for batik (indigo for blue, morinda tree for a yellowish-red, and a combination of three dye stuffs for soga brown).  From there we move on to design inspiration, creation, belief and spiritual relevance.

While there are many excellent books on batik making, there are no documentary films as detailed and interested in batik making as practiced in local villages and by a new generation of artists as we find with Batik of Java: A Visual Journey. 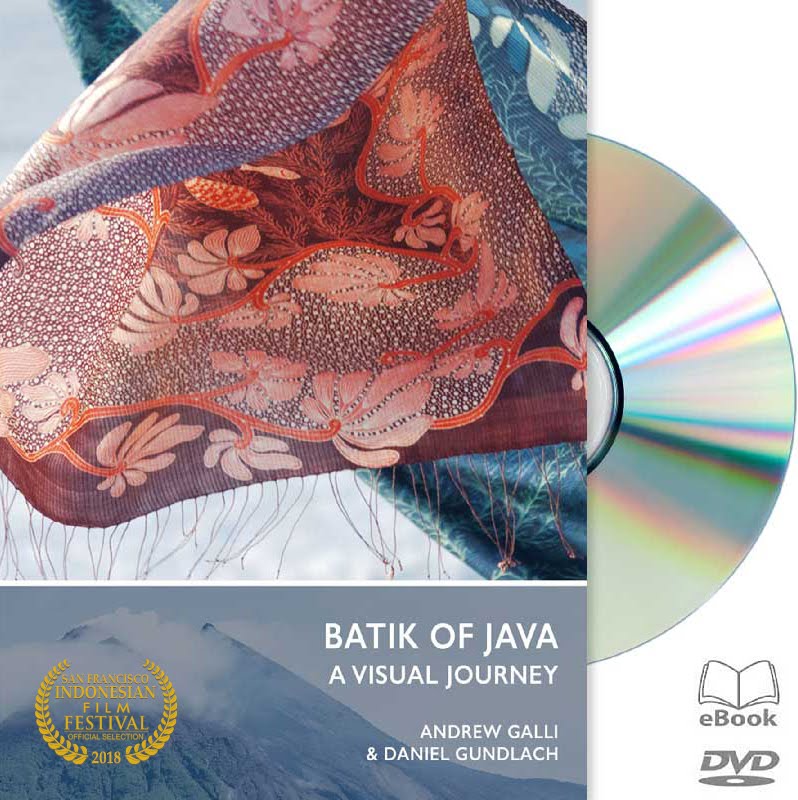 The film “BATIK OF JAVA: A VISUAL JOURNEY” offers a wonderful overview into the national treasure of Indonesia. A wonderful opportunity to learn batik visually, and an excellent basis for moving on to appreciate some of the many books on batik, surface design, and Indonesian Art & Culture.

“…The film Batik of Java: A Visual Journey contradicts the inevitability of industrialization – at least in batik-making, introducing us instead to village makers and city artists who remain grounded in their natural, social and cultural ecology, in a living system of community-based artisans and entrepreneurs, able to co-exist with industrialization and modernization on their own terms.”  – Eric Casino, Social Anthropologist, Former Head of the Division of Anthropology, National Museum of the Philippines.

The film is now available as a DVD and online from Galli Creative in a long format of 90 minutes with English Subtitles.

For more information, please read this wonderful review of the experience of making this film written by Jessica Valentina of the Jakarta Post

Order 'Batik of Java' and enjoy the streaming film today. DVD available as well for purchase.

Claire Benn: Taking her Own Advice

Please familiarize yourself with the link controls which are at the bottom of the flipbook reader.