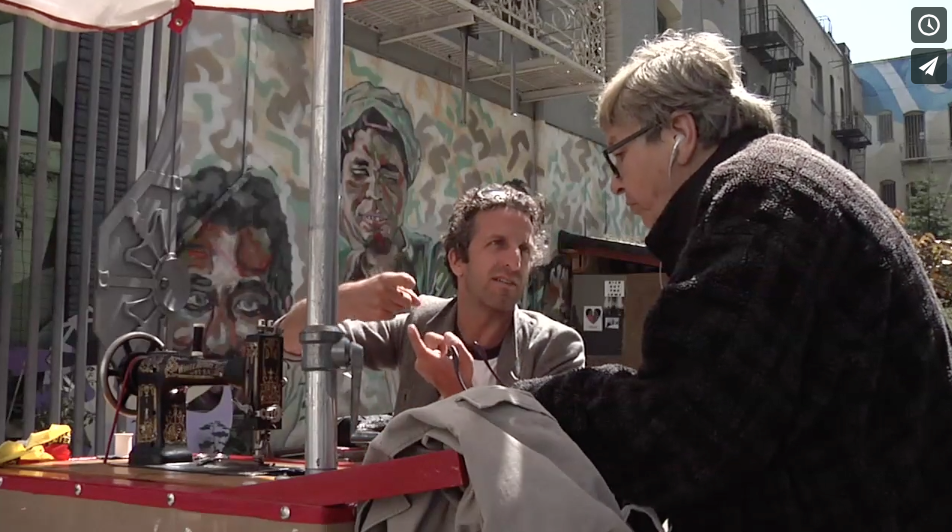 In October, 2009, Jan King and Andrew Salmon of the London Knitting & Stitching Show invited Michael Swaine to London, England to walk thru various London boroughs and share his ‘free mending’ with the people he came across.

It might sound a bit strange but it is actually a very interesting and long-running project of Michaels which began in one of the toughest neighborhoods of San Francisco, the Tenderloin.  Michael was obsessed with things that could rightfully be mended but instead were thrown away; and with that the free project began as a monthly initiative to take his pedal sewing machine and ice cream looking cart to the Tenderloin to provide mending of all sorts of things from blue jeans to backpack zippers to jackets.

It is a bit curious when you think about it. Is it the socks that Michael is mending or our greater community which grows increasingly disconnected?   Either way, Michael has left a permanent mark on the people of San Francisco, and now — London, England, by way of the London Knitting & Stitching Show at Alexandra Palace.

Filmed by Andrew Galli in the Tenderloin of San Francisco, for Creative Exhibitions with grant funding by Arts Council England.

To learn more about Michael’s project and his greater whereabouts, please read the excellent write-up by Liz Cooper. Special thanks to Jan King and Andrew Salmon of Masseria della Zingara, Italy, for their sponsorship of this project.

Item added to your cart

Continue Shopping Go To The Cart